Few destinations on earth compare with the sea-run fishing on the Rio Grande, where most fly fishermen rate the trophy sea-run brown trout as the ultimate angling experience. Located in the southern corner of Argentina, most of the Rio Grande is on the Chilean side of the border, although nearly 80% of the prime spawning habitat and all of the Rio Grande's best fishing is on the Argentina portion of the island, much of it in the first 45 miles above where the river enters the sea.

Few destinations on earth compare with the sea-run fishing on the Rio Grande, where most fly fishermen rate the trophy sea-run brown trout as the ultimate angling experience.

Located in the southern corner of Argentina, most of the Rio Grande is on the Chilean side of the border, although nearly 80% of the prime spawning habitat and all of the Rio Grande's best fishing is on the Argentina portion of the island, much of it in the first 45 miles above where the river enters the sea. La Villa de Estancia Maria Behety is the most deluxe lodge on the Rio Grande. Guests share more than 102 pools with Estancia Maria Behety Lodge and enjoy old world charm in the beautifully restored, historic mansion.

Sea-run browns on the Rio Grande average 10 – 14 lbs, and experienced fly rodders usually hook about a half dozen per day. Trophy fish in excess of 20 pounds are not uncommon and about one in 50 is a monster pushing 30 pounds!
Resident brown and rainbow trout fishing in the tributaries and the Rio Grande headwaters is excellent.
The big sea-run brown trout start to return to the pools of the Rio Grande in significant numbers around Thanksgiving.
Less than a month later the river is loaded with fish and it is estimated that by the first day of each New Year, nearly 80% of the escapement has reached their annual family reunion. That translates into more than a thousand monster trout per river mile. The fish initially herd up in the best lower river pools, though hundreds more of the silver sea trout continue to pour into the Rio Grande on every high tide, twice a day until sometime in May. The most sought after dates are February and March.

While mid-season offers the most pleasant weather, the best weeks ever recorded have been the last weeks of the season. Early season fish are very aggressive, full of fight, and acrobatic. They move readily to dries, and three of the largest sea trout ever recorded were caught and released in January.

Day 1) The program begins with the reception at the Rio Grande airport and transfer to the Villa where you are received by the Lodge manager. After settling in, the fishermen are invited with a welcome cocktail and the plan for the week.
Day 2 to day 6) After breakfast the fishermen are transferred in 4 x 4 trucks to the corresponding pools. At noon he has lunch in the Villa and after a while of relaxation, in the afternoon, he goes out again to fish in another pool until the magical last hour. Almost at night you return to the Villa for a comforting hot water bath and dinner.
On the 8th, transfer to the airport.

La Villa has to be considered one of the most luxurious fly fishing lodges in the Americas, accommodating 6 anglers per week in single occupancy rooms.
Amenities include a 9,000 bottle wine cellar, private rooms, Jacuzzi tubs and a very talented team of guides and exquisite dining. During non-angling times between double daily fishing secessions, guest will gather in one of two living areas where fishing tales are told, cocktails enjoyed and the next fishing sortie is anticipated with the warmth and comfort of a crackling fire burning in the fireplace.
Other amenities at La Villa include radiant floor heat, 24 hour internet service, wader/equipment room, designated fly tying areas and gift and tackle shop.

Rods
Single-handed rod #8 Wt or #9 Wt , 91/2 or 10 foot. Two handed rods are increasingly popular and allow anglers to cast a comfortable line with less effort, particularly on windy days.13 to 15 feet for a 9-11 Weight line.

Reels
With a strong, smooth drag is a must. Reels (and spare spools) should have capacity for the fly line and 100 yards of 20 pound backing.

Lines
Weight forward fly lines are generally used on the Rio Grande. Floating lines are typically most useful in low water conditions and during early morning and evening hours. Also a sinking shooting taper is very important. The Teeny T-200 and T-300 lines have proven to be excellent. For double hand rods a Skagit or Scandi lines (+@500 grains) are higly recommended.

Leaders
Sea trout aren't particularly leader shy. For floating lines it's good to have knotless tapered leaders from 9 to 12 feet with 0X tippets.

Note: Larger streamers should be weighted and all should be tied on heavy hooks with good gapes. Treble & Double hooks are not allowed on the Rio Grande. 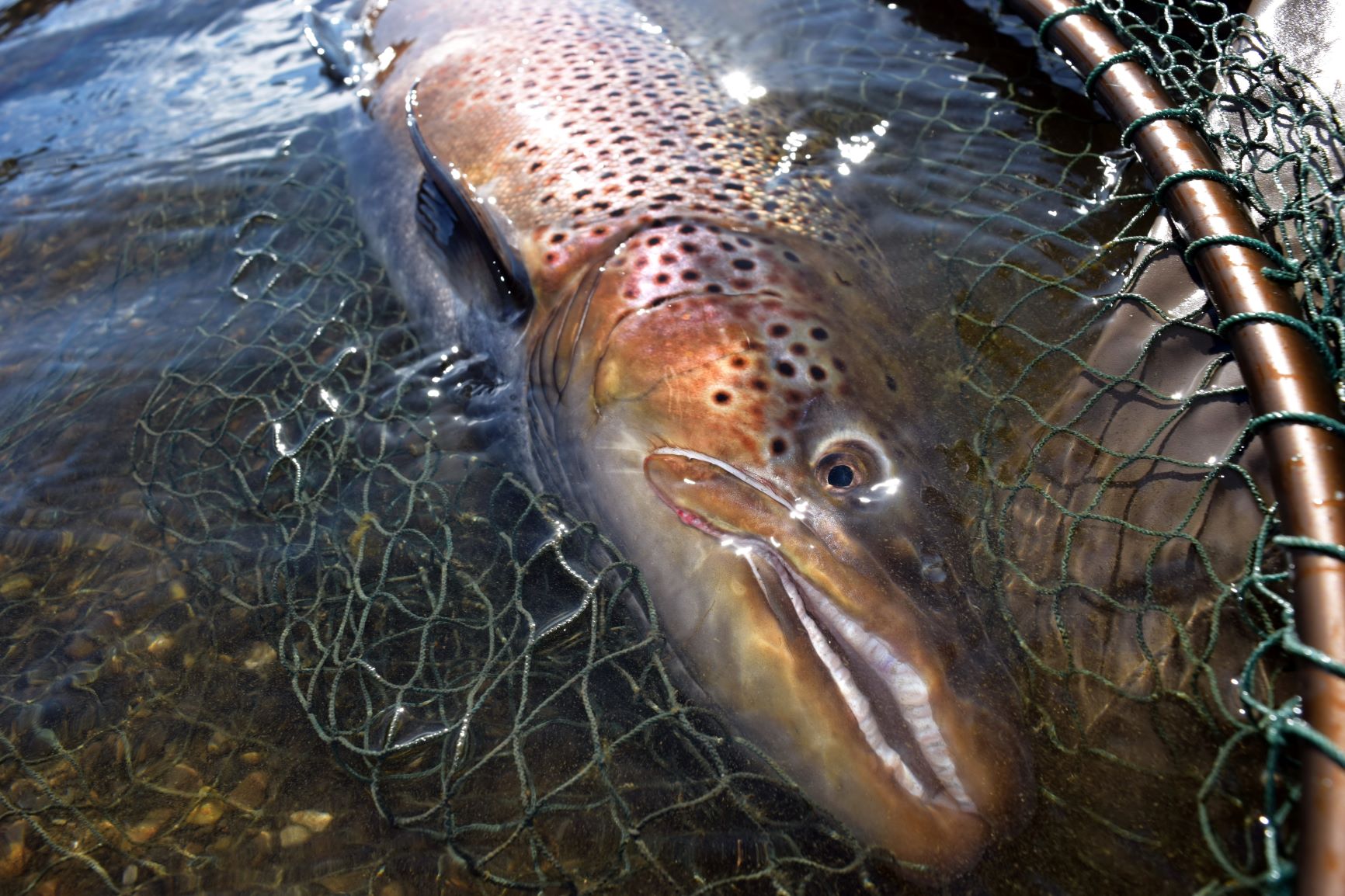 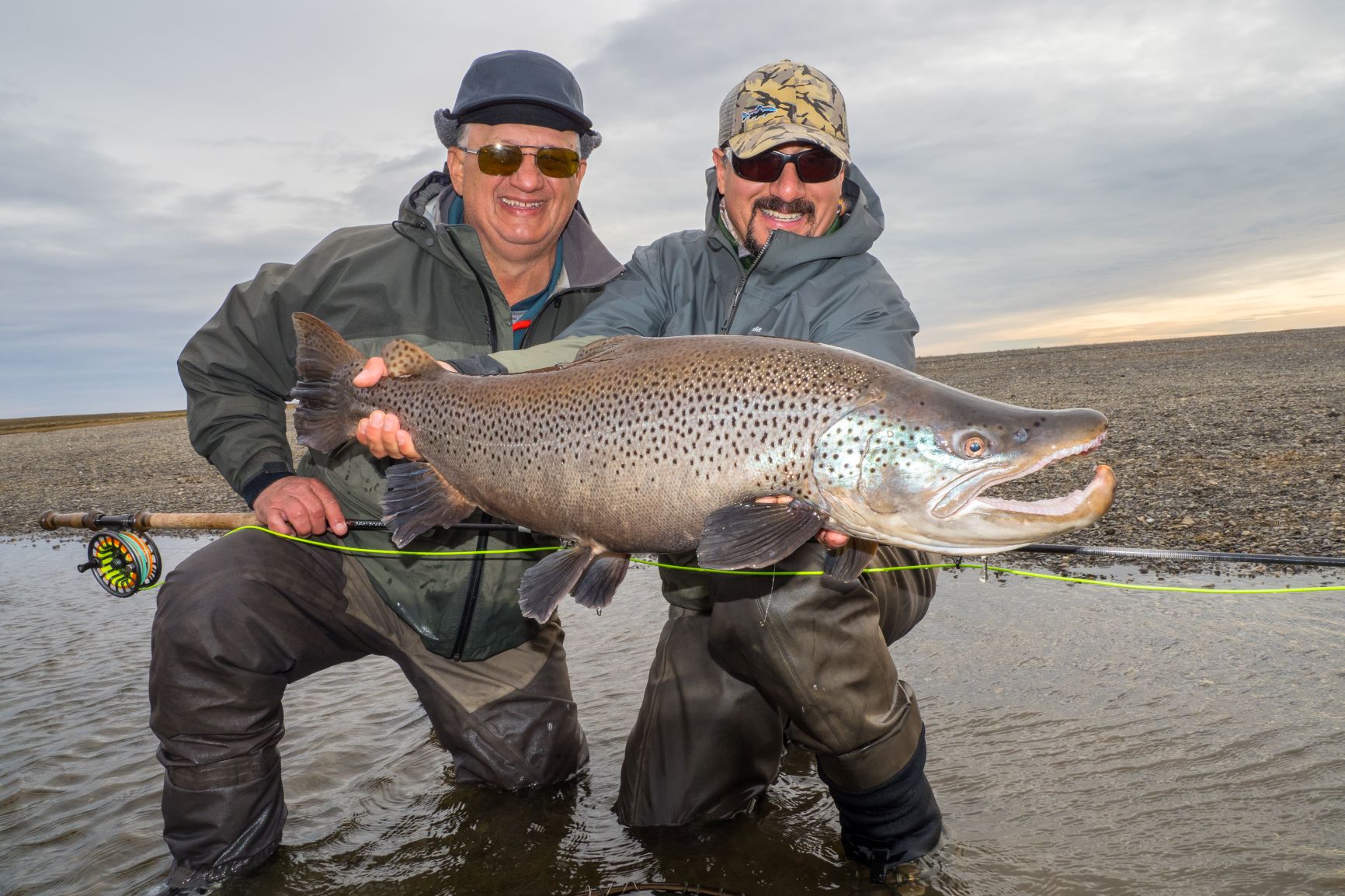 ~ Per angler in single basis accommodation and sharing fishing with another angler. ~

Rates do not include: International and local flights, personal health insurance, fishing equipment and flies, fishing license and gratuities.

Other programs in Patagonia, Argentina

Moon phases for this month